Even as unprecedented challenges to the Constiutional order unfold in national politics, the policial world in Texas was focused on the convening of the 87th Texas Legislature in Austin amidst a surging pandemic, a faltering economy, and shockwaves of Donald Trump's political imposion rippling through Republican Party politics at all levels. Below are five snapshots from the week the legislature came back to town.

1. Texas House members test positive for COVID-19 as the legislature begins. Less than 24 hours after the Texas House of Representative completed their first working session, State Rep. Michelle Beckley tweeted that a member she had been near on the floor had tested positive for COVID-19. Shortly after Beckley’s Tweet, The Texas Tribune reported that Democratic representative Joe Deshotel has confirmed that he tested positive for COVID. “The Democrat said he received a rapid test outside the Capitol because it was “free and quick” as he was heading home Thursday afternoon,” Alex Samuels and Casi Pollock report. Deshotel says that he was last tested the Friday prior to the opening of the legislature, and had not availed himself of the free and quick testing prior to joining his colleagues. In both the House and the Senate proceedings this week, there was a strong undertone conveying that masks remain a political gesture for lawmakers, including several Senators not wearing masks at their desks and posting social media that showed them on the Senate floor unmasked. This all comes even as most Texans seem to have accepted them as reasonable public health measures (at least back as of October) – and as the indicators on the spread and impact of the virus continue to climb.

I was informed, last night, a member in my 3 foot radius on the TX house floor tested positive for #COVID19. They did not test on Tuesday prior to the swearing in ceremony. I was on the floor weds & thurs & exposed -10 day self quarantine #txlege

2. As the legislature grappled with the practical and policy challenges posed by the pandemic, Governor Greg Abbott announced Thursday that Texas was the first state to administer 1,000,000 COVID-19 vaccinations, but one should consider the denominator here. The Governor's official announcement earned a small rash of positive, credulous headlines in the state media. Less headline ready but more relevant to public health, if one takes into account that Texas has a larger population than most of the other states  Texas is in the middle of the pack if you look at the per capita rate of shots in the arm. Per a recent state-by-state comparison compiled by The New York Times updated the same day as the Governor’s announcement, Texas had given shots to 3.6% of the population, ranked 22nd among American states, territories, and the District of Columbia. The top ranked state is West Virginia (6.6%). Texas was just below Tennessee (3.9%) and Louisiana (3.8%), but edged out New York, Kentucky, and Indiana, all at 3.5%. Alabama had delivered the lowest share among the states, at 1.9%.

3. Proposed amendment to prohibit abortion during procedural debate shows that the ideological right-wing of the caucus will continue to press the cause of groups on the party’s right-wing, regardless of the overarching conditions. Watch for the specious effort to inject the substantive issue of abortion into the rules debate to show up on the scorecards of conservative interest groups after the session, an expectation which likely helped the amendment gain 41 yea votes, all from Republicans. Other amendment proposals emanating from this corner of the GOP caucus, including creating exceptions for mask wearing and reserving the chairs of all committees to the majority party, failed with significantly lower levels of support.

4. The Texas Senate voted along party lines as Senate Republicans ceded more of their own power to the Lt. Governor. Senate Republicans remain in Dan Patrick’s thrall, ultimately choosing to contribute to polarization and partisanship in the legislature, and, in institutional terms, to cede authority of the Senate as a legislative to the chair of that body. As the Senate parliamentarian explained in an interview for the Texas Politics Project in 2014*, prior to the Senate ceding power to Patrick in 2015 when the supermajority needed to move legislation to the floor was reduced from two-thirds to three-fifths, for all the talk about tradition and manipulation of the rules, these thresholds have always been a matter of negotiation between the members and the Lt. Governor. The main thing that has eroded here is the willingness of the majority caucus to defend the power of the body against the chair, rather than the defense of a particular threshold. In this sense, polarization and partisan are both cause and effect of the erosion of the consensus mechanism that has been used in recent decades.

5. While Census data has yet to materialize, the specter of redistricting haunts the legislature from the start. All of the Democrats' proposed amendments to the rules proposed changes to the redistricting process, and were undoubtedly, given the certainty of their failure, intended to begin establishing a record for the inevitable court cases that will result from the maps —  maps that will be written without the Democrats’ input. As we wrote earlier this week, racial politics are fundamental to the drawing of the maps, at a time when the politics of race are as activated as they have been for decades. Groundless suspicions about “rigged elections” among conservatives and conspiracy theorists have metastasized on the right to a dangerous extent, as we saw last week. The dramatic effect of this version of skepticism of the process has eclipsed the more deeply grounded skepticism of the fairness of the electoral system among people of color, especially African Americans — which is evident in polling data, including the most recent UT/TT poll.

And on national politics for one beat, which are impossible to ignore: there’s been some notable national polling this week from Ipsos and the Washington Post, respectively, further illustrating the depth and nature of the polarization we wrote about earlier this week in the context of Texas. The Ipsos poll, conducted in conjunction with Axios, found a majority of Americans in favor of Trump’s removal (56%), but that included only 17% of Republicans, compared with 94% of Democrats and 54% of independents. The Washington Post poll went slightly further, asking if Trump should be removed from office and disqualified from holding elected office in the future. Here, again, 56% of Americans supported removal and prohibition of office, including only 12% of Republicans compared to 89% of Democrats. 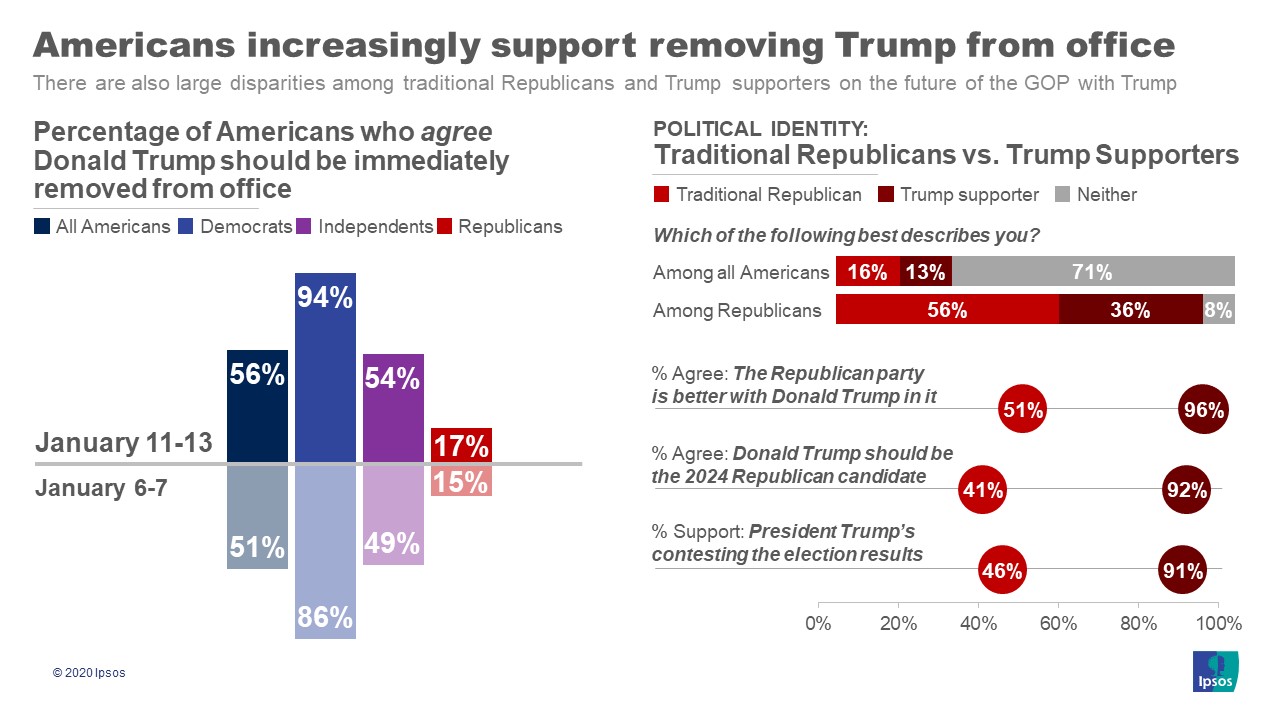 The broader takeaway from the Ipsos polling was to illustrate the extent to which Trump holds considerable sway over the Republican electorate nationally. On the one hand, this might be seen as remarkable given the events from last week; on the other, Trump just lost reelection with the most votes of any Republican nominee in history, and we know from extensive polling here, and elsewhere, that the vast majority of Republicans voted for Trump (just as the vast majority of Democrats voted for Biden). The Ipsos poll found 63% of Republicans approving of Trump’s “recent behavior” (61% approved of Senator Cruz’s), 69% disagreeing with the notion that “Donald Trump is responsible for the actions of his supporters,” and 66% agreeing that “The Republican Party is better with Donald Trump in it.” In the short-run, at least, Trump’s brand of politics will likely remain strong in the short, 140-day, legislative session for the simple fact that the GOP electorate’s identification with Trump remains strong. The forces fueling what we now think of as Trumpism were strong in Texas before Trump won the presidency – so their staying power shouldn’t be surprising.