The Misguided Democratic Hope, Republican Fear, of a Blue Wave Based on 2018 Texas Primary Turnout

The increased activity of Democratic partisans in the early stages of the 2018 Texas primaries, especially the increase in their early voting, has many seeing yet another sign of the much-heralded Democratic wave reaching Texas shores. And Democrats are not the only ones raising flags. Governor Greg Abbott sent an email to supporters this week which read, in part, “If these trends continue, we could be in real trouble come Election Day,” further noting, “Democrats are already on a winning streak, flipping seats in special elections across the country in GOP strongholds.” With both Democrats and the state's Republican figurehead predicting a Democratic surge, the political press can't help but follow suit.

The second assumption is that higher Democratic turnout relative to previous comparable primary elections is a reflection of increased enthusiasm, and will, again, result in better general election performances. The second version of this assumption is operative whenever one compares 2018 Democratic primary turnout to 2014, notices the increase in voting, and assumes that this increase portends a better general election for Democratic candidates than recent attempts. Let's look at the implications of both of these sets of assumptions and see what the available data has to say. 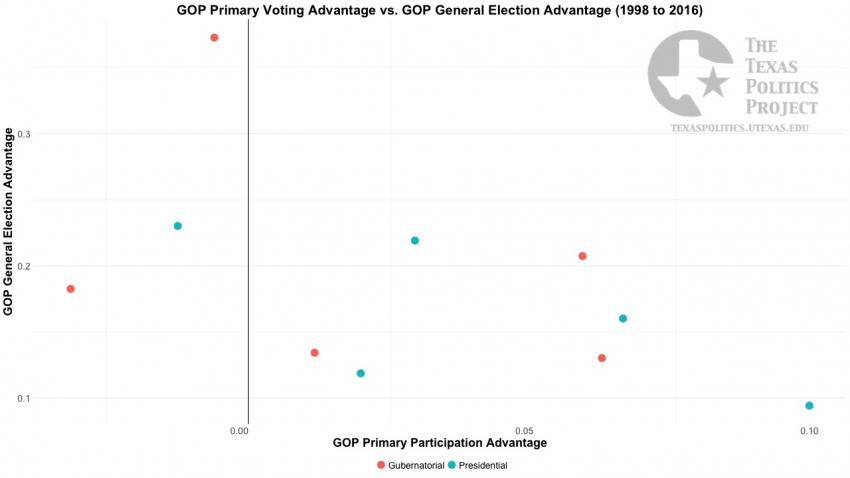 Not only is this not the case, but it appears as though in the three elections in the last 20 years in which Democrats held a primary participation advantage (the points to the left of the vertical line: 1998, 2002, and 2004), in two of those cases (1998 and 2004) the Republican electoral advantage turned out to be larger than in any other election in the time series. The opposite of the prediction based on the first set of assumptions.

In this case, we still want to explain the variance in the GOP’s electoral advantage as measured through the difference in the share of the two-party vote, but now, we’ll plot the percent change in Democratic turnout relative to the previous comparable election (presidential or midterm) on the horizontal axis to see if a pattern exists. Visually, the results below paint a picture somewhat closer to the assumption. It appears as though there is a slight decrease in the Republican general Election advantage as Democratic turnout increases from one comparable election to the next (looking at the points from left to right on the graphic) – but the key word here is “slight.” While this relationship may look like it might exist based on a cursory visual inspection of the data, there is actually no statistically significant relationship between the two measures. 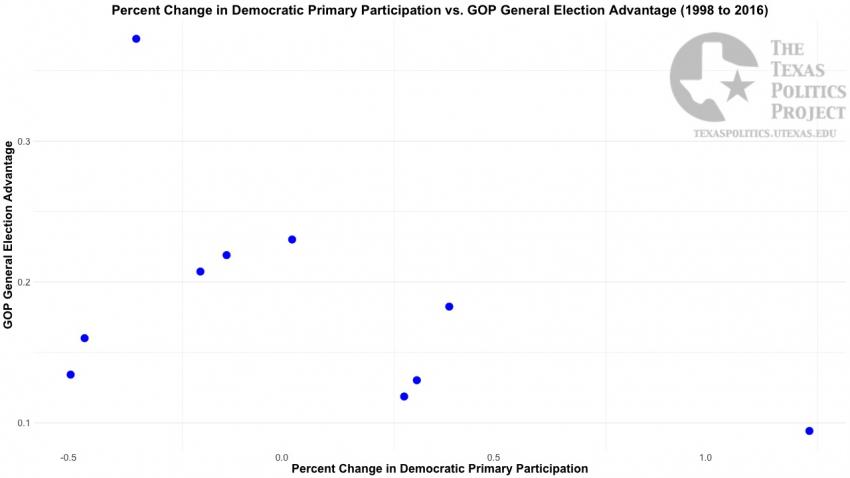 In summary, looking at elections between 1998 and 2016, there is no evidence of a relationship between partisan primary turnout and general election performance to speak of.

Before Texas Republicans relax and Texas Democrats sink back into their usual state of depression, a few caveats should be mentioned. While no statistical relationship is apparent in the data, increased Democratic primary participation is no doubt a necessary, if not sufficient, condition for improved general election performance. Additionally, the data that we’re examining here is a rather short time series (though an accurate representation of recent voting trends), and it could be the case that with more data, we might find a relationship (though we're skeptical). Finally, it’s hard to model the outcome that people have in their minds as they promote these results. They might be trying to justify an expectation of better Democratic performance, but in reality harboring an hopes of a (any) Democratic victory, when we have no occurrence of this latter phenomenon in recent history. This is all to say that while the relationship between primary participation and general election performance hasn’t existed in the past, this doesn’t mean that the increase in Democratic enthusiasm that people are imagining isn’t real, or that it won’t manifest itself this time around; it’s just not a conclusion that people should draw with such certainty from primary election turnout, let alone a few days of early voting returns.

* The benefit of looking at the percent of registered voters is that this removes changes that are a function of population increases by normalizing the quantities.