The all-but-assured passage of the sanctuary cities bill, Senate Bill 4, by the Texas House of Representatives today rests on the assumption that, as Democratic State Rep. Chris Turner told the Texas Tribune’s Julián Aguilar, “We know the Republicans have the numbers in the building.” The other critical piece for understanding the high likelihood of the House passing its version of SB4 can be found in the attitudes of the Republican voters who keep most of the 95 Republicans House members in their seats during primary season in Texas: they strongly oppose sanctuary cities and will be a receptive audience for high-profile efforts at the nexus of punishing undocumented immigrants in the U.S., law and order, and local officials presented as soft on both crime and illegal immigration.

Amidst a legislative session largely defined by intramural conflict among Republicans – which has muddled the progress of other causes near and dear to the hearts of the conservative activists in the party while remaining divisive among the broader ranks – sanctuary cities legislation is, for the most part, a chance for some good old-fashioned partisan politics between Democrats and Republicans. Republicans will hold advantages in both numbers in the legislature and, critically, the support of their base in fighting Democratic efforts to procedurally derail SB4 and to otherwise sabotage the bill using the amendment process.

This pattern of Republican support emerged clearly In the February 2017 University of Texas / Texas Tribune Poll: 80 percent of Republicans opposed sanctuary cities (72 percent did so “strongly”).

Lest you think that this reaction was purely based on the partisan cue among Texas Republicans to take the side of restrictive immigration policies without understanding what the policy at stake would do, the February poll item informed people of the arguments persistently made for and against sanctuary cities before asking the respondent whether or not she supports or opposes them.

The survey item and those arguments looked like this:

Some cities in the United States act as what have been called “sanctuary cities” for immigrants who are in the U.S. illegally. That means that when local police or city government employees learn that someone is in the country illegally, they do not automatically turn that person over to federal immigration enforcement officers for possible deportation. [Support and opposition clauses were rotated randomly.]

Supporters of “sanctuary cities” say that this improves public safety because it encourages people in immigrant communities to work with police to help arrest dangerous criminals without fear of being deported themselves.

Opponents of “sanctuary cities” say that this practice is a violation of federal law and allows some dangerous criminals who are in the country illegally to continue to commit violent crimes.

In addition to this item in the most recent UT/TT poll, the Texas Lyceum Poll (of which Joshua Blank is Research Director) asked adult Texans when police should check the immigration status of individuals across a range of interactions. (Note the difference in samples – the UT/TT poll is of registered voters.) Not surprisingly, there is universal agreement that immigration status should be checked when someone is arrested (it’s a question for another poll as to whether or not that person needs to be charged and/or convicted, or whether these distinctions are, as we suspect, meaningless to public preferences). But support drops from roughly 90 percent to roughly 40 percent for the three other police interactions tested: during a routine traffic stop, when someone is reporting a crime, and when someone is a witness to a crime. However, a majority of Republicans support checking immigration status in all four cases. 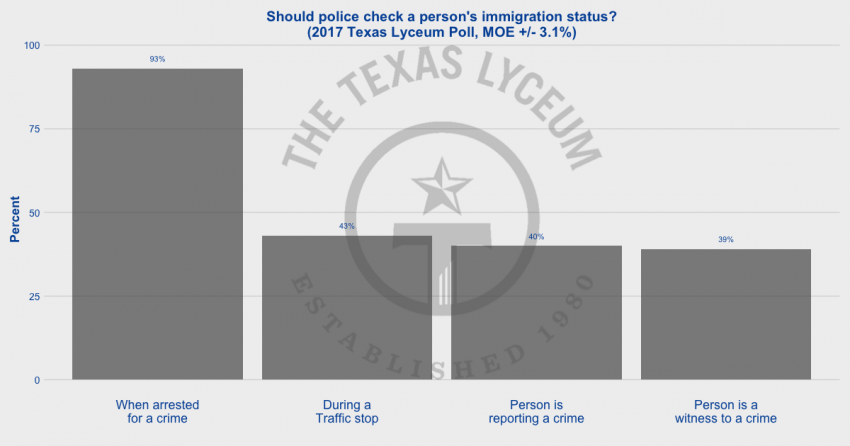 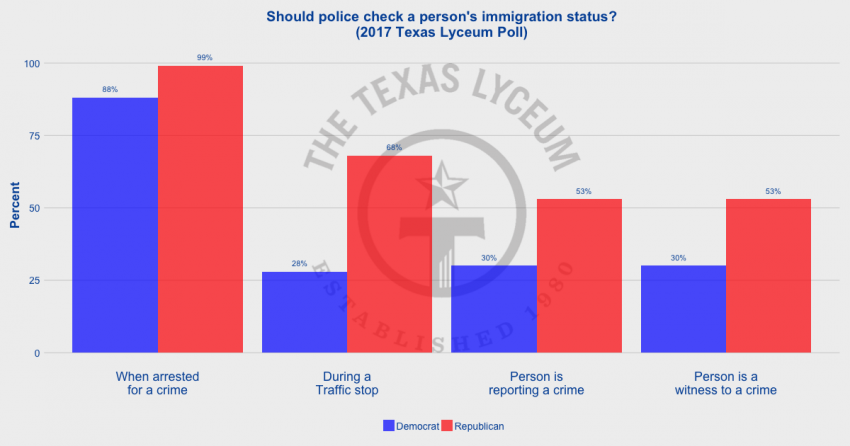 Today’s debate might get heated, but don’t expect the pile of amendments that Democrats and some Republicans are going to try to attach to SB4 to derail it from it’s ultimate fate because the majority party knows that the vast majority of its voters want to see it passed. This session has had many murky days, in which subjects like vouchers and bathrooms have blurred the partisan boundaries, and shifted attention to the internecine battles in the governing party. While the factionalism in the GOP may make some cameo appearances today – the House bill is certainly less draconian than the Senate’s original vision, a point House dissidents won't be able to resist making during debate – expect the lines between Democrats and Republicans to be the brighter one today.