Some Back of the Envelope Ciphering On Clinton's Chances in Texas

Just when you thought the presidential election couldn’t get any weirder, many poll aggregators and various election projections have moved Texas from deep red, “Solid Republican” to light reddish “Lean Republican.” These shifts in expectations have been driven by a cluster of polls, conducted at various points during the last 10 days, finding Donald Trump’s lead over Hillary Clinton in Texas to have dwindled to between 2 and 4 points, depending on the poll.

The three most recent polls used methodologies, including modes, that were completely dissimilar, yet, as the results below suggest, yielded strikingly similar margins. In short order, the narrowing race led to a resurgence of speculation about whether Hillary Clinton had a shot at winning Texas, just four years after Mitt Romney bested Barack Obama by more than 15 percentage points.

While the trend line in Texas presidential polling certainly justifies this speculation, there are good reasons not to go too far down the road toward speculating on – we’ll just use the phrase even though we don’t want to – Texas turning blue based on this polling. The main reason is timing: all of these polls were in the field during a period of sustained negative media coverage of Donald Trump. Two of the polls were conducted during a period in which the Access Hollywood tapes were released, Trump responded (and responded and responded), and during the second debate and its aftermath. One of them was in the field in the three days immediately following the Sunday debate. Needless to say, these were not good times for Donald Trump.

We could write a whole post about polling in Texas in this election cycle and what it may or may not tell us about Texas in the short, medium, and long-term, but for the moment, we’re just stipulating that these polls are all likely in the ballpark of what’s actually going on during the time of their fielding.

Nonetheless, with final voter registration numbers counted and these polls permeating the ether, it seems a good time for some back of the envelope arithmetic on the prospects of a Clinton victory. There is no high falutin modeling at work here – just some rough calculations about how much the Texas vote would have to differ from the last few presidential elections for Hillary Clinton to get more votes than Donald Trump. Our goal is to paint as rosy a scenario for Clinton as possible to get her over the line in Texas, albeit without requiring a total suspension of disbelief.

Whatever the polling is telling us, It turns out that the voting scenario has to be very rosy for Clinton to gain Texas’ electoral votes.

What is the margin Clinton has to make up?

In the last three Presidential elections, the Democrats’ best showing was in 2008. By best showing, we mean that the Republican ticket got fewer votes than they did in 2012 and 2004, and the Democratic ticket got more votes than in 2004 and 2012. In practice, this meant that Barack Obama lost to John McCain by 950,695 votes.*

So, as the first step in stacking the deck a little for Clinton, let’s assume that the Democratic nominee needs to make up those 950,695 votes to tie Donald Trump on election day. It seems that these votes can come from any combination of three places: (1) Republicans staying home, (2) Democrats turning out at higher rates, and/or (3) new voters. You’ll notice that we’ve left defections out here, that is, Republicans voting for Clinton and Democrats voting for Trump. The reason for this is simple, Republicans in Texas have intensely negative views of Clinton, and there’s nothing to make anyone think that Trump’s actions have endeared him to Democrats, even those Democrats with lukewarm feelings towards her. While the number of defections will not be absolute zero, it seems they are likely to be rare. 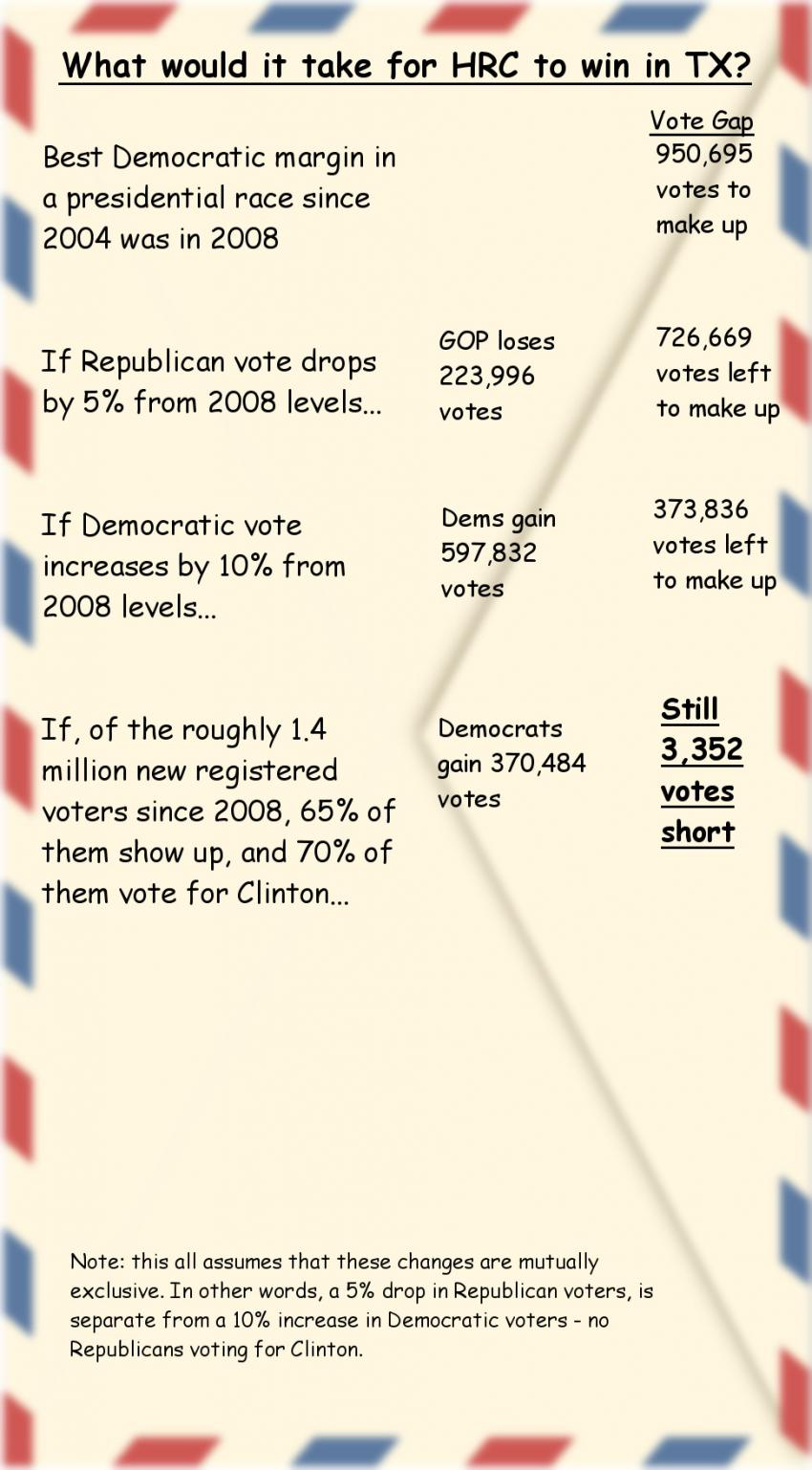 The first question we have to answer is: what would we expect a reasonable decrease in voters to look like? Since we’re focused on the last three presidential elections, let’s take the absolute difference between the highest and lowest GOP turnout as a starting point, which, in this case, would be the 2012 vote total minus 2008’s vote total, or 90,515 votes. This would be 2.02 percent of the GOP vote total in 2008.

For good measure, let’s say that Republican turnout decreased by 5 percent from their low in the last 3 presidential elections (remember, we’re trying to paint a rosy though not totally fantastical picture for Democrats). In 2008, 4,479,328 people voted for John McCain (and yes, we know, technically, not all of these people are Republicans, but that’s why this is a back-of-the-envelope calculation). So a 5 percent reduction would remove 223,996 votes, decreasing the GOP vote total to 4,255,332

Democrats Turning out at Higher Rates

Looking at Democratic turnout is a little bit trickier. Whereas GOP turnout has been very consistent across presidential election cycles lately, if we were to take the same approach to estimating a reasonable increase in Democratic participation, we would find that the difference between their 2008 vote count (the highest they’ve ever had) and their 2004 vote count (the lowest of the last three election cycles) would yield 695,929 votes – which would almost make-up the remaining gap after we account for GOP voters staying home at the rates estimated above. But this assumes that there is no upper bound to the number of votes that Democrats can expect, and further, that Democrats can just increase their highest vote share ever by approximately 20 percent. So maybe we should think about this differently. We want to paint a rosy scenario for the sake of argument, but not abandon all realistic bounds. Both 2004 and 2008 were unusual years – 2004 due to George W. Bush’s continued crossover popularity in his home state, and 2008 due to the high-interest, high mobilization Democratic primary contest between Clinton and Obama, and the chance to vote for the country's first African American Presidential candidate.

(This is not to say that one couldn’t argue that this is a reasonable increase if one believes that there are over half a million unharvested Democratic voters that will actually turn out on election day. The 2008 vote total is a high water mark that can be increased upon election-by-election, but not by a 20 percent in a single election – we think.)

Rather than try to use numbers from 2004 and 2008,  we’ll posit a generous but somewhat more realistic 5 percent increase, yielding 176,432 additional votes. If they increase their high water mark by 10 percent, they would garner an additional 352,863 votes.

Now we’ve created a scenario in which the ground that Hillary Clinton has to make up in Texas drops from approximately 950,000 votes to between 375,000 and 550,000 depending on how many additional voters you believe that Democrats can find and turn out.

Well, roughly 900,000 Texans have registered to vote since the primaries this year, which is adding partial fuel to the question of Clinton’s chances in Texas (along with polling that has shown a tight race by historical standards discussed above). Looking back to our touchstone election in 2008, there were 13,575,062 registered voters according to the Secretary of State. Today, there are roughly 15,000,000. So what should we do with all of these new potential voters – 1,424,938 in all?

There are two questions that we have to answer to begin to think about what to do with these new voters: First, what percentage of these voters do we think will turn out? Second, how will they break between Trump and Clinton?

This is easily the most “artful” part of this calculation since it’s purely speculative. Of the roughly 900,000 Texans who have registered since the primaries, should we expect them to vote at higher rates than registered voters have historically participated in Texas presidential elections (approximately 60%) based on the argument that they just registered and were likely spurred to do so by the increased interest in the current campaign season? Or might they participate at lower rates given their lack of being registered prior to the primary, and therefore, are likely to vote at lower rates than the overall voting population? Or should we just assume that they will vote at the regular rates of Texans?

The table above assumes different turnout rates for the additional 1.4 million new registered voters since the last election, and within those rates, different Democratic vote shares ranging from 55 percent to 70 percent. What’s notable here is that in only one case do the Democrats make up the additional 373,000 votes needed (under the rosiest assumption of a 10 percent increase in Democratic turnout and a 5 percent decrease in Republican turnout), and it requires 70 percent of the newly registered to show up, and for 7 out of every 10 of them to vote for Clinton.

Leaning But Not Falling

This back-of-the-envelope thought experiment shows how difficult it is for Democrats to compete in Texas at the presidential level.

To be sure, there are caveats aplenty here. At the intersection of demographic change in the state and the difficulty of knowing what the composition of the electorate will be in a very strange election year, a more detailed tweaking of the expected votes among the groups Donald Trump has potentially antagonized – Latinos, women (including Republican women), college educated Republicans, etc. – might find the votes to carry Clinton over the hypothetical finish line. In the end, though, these speculations would also depend on pushing the envelope on assumptions about turnout and compromises in party loyalty that don’t appear totally evident in any polling in Texas. Nor does our arithmetic take into account the possibility of large scale party defections. This number probably won't be zero – but Clinton's strong negatives among Republicans dictate against large numbers of GOP partisans giving her their vote. Donald Trump may well be capable of changing this dynamic around the edges given the track he's on, but the combination of party identification patterns in the state and the strongly negative views of Clinton suggest that not voting is likely to be a more common response than voting for her among Texas Republicans.

In this more simplified scenario, we assume that Republican turnout declines by a fairly significant proportion from their lowest vote total in the last three presidential election cycles, that Democratic vote totals increase substantially from their highest vote total in the last three presidential cycles. We also assume that new voters turnout out at historically high rates (for Texas) AND vote for Clinton in droves. Yet even under these very generous assumptions, she doesn’t quite make up the roughly 950,000 votes that separated Obama from John McCain in 2008. There is good reason to believe that polling is finding Texas leaning Republican rather than the solid Republican state it has been in presidential elections for most of the last three decades. But the change in its tilt doesn’t necessarily mean it’s ready to fall the other direction without still more shaking at the foundations.