As the national and international discussion of the larger role of Facebook and other social media applications rages in the wake of Russian subversion, the ongoing Cambridge Analytica revelations, and Mark Zuckerberg's appearances on Capitol Hill, attention has shifted away from the more mundane uses of Facebook by real live elected officials.

Even with all the current angst about Facebook data as a backdrop, we are interested in how members of the #TXLege use the social media platform given its nearly ubiquitous use by elected officials in the state. One-hundred-forty-one members of the Texas House and 28 Texas Senators posted on public campaign Facebook pages where they designated themselves as a “politician” or a “public official” during the 2017 Session. This makes Facebook a venue for interactions with constituents as well as a forum for public interaction with the legislature as a whole.

If this level of use by legislators confirms the suspicion that we will find elected state officials on Facebook, there remains a lot of work and data collection (!) to be done. We begin here with a basic assessment of the volume of these Texas House and Senate members’ use of their Facebook accounts during the 2017 Regular and Special Sessions, and what kind of return they got on their efforts. Even this preliminary foray yields interesting, broad observations: while Democrats may post more often, and are overrepresented among the top posters, Republicans get a higher return — with a few members as standouts in getting high returns on their posts.

Are there differences in the posting habits of Republicans and Democrats?

Who are the most active users of Facebook in the Legislature?

Given the average posting habits of members, it shouldn’t be terribly surprising that individual Democrats also dominate the top spots in both the House and Senate – with Democrats composing four out of the top five most active Facebook users in the Senate and all of the top five users in the House. Jose Menendez (State Sen. District 26) and Ryan Guillen (State House District 31) are the top Facebook users by volume of posts in the Senate and House, respectively.

The two graphics below show how often members of the House and Senate posted on their official pages during the 2017 Regular and Special Sessions. Because of the number of House members, the graphic only shows the 30 most active users by volume (a graphic of the posting volume for all House members is at the end of this post). 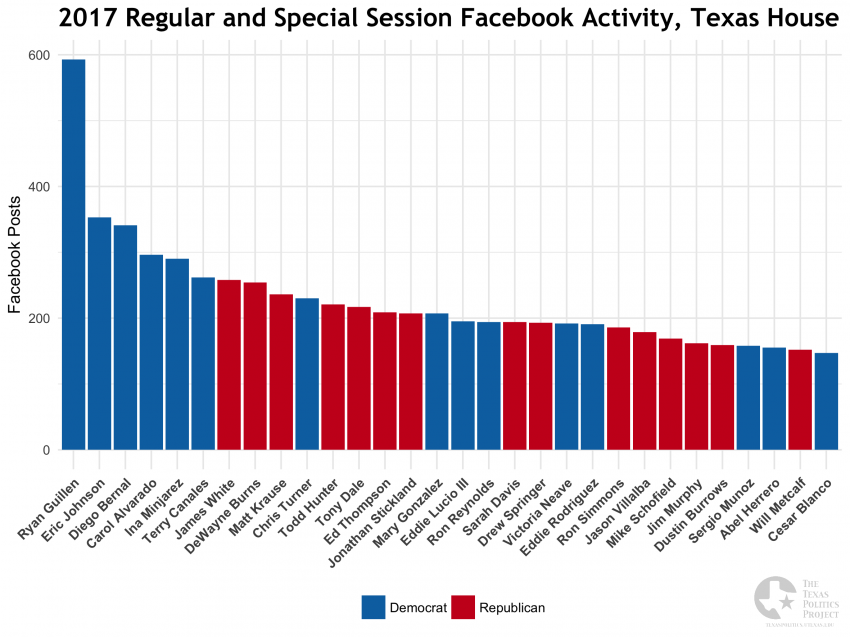 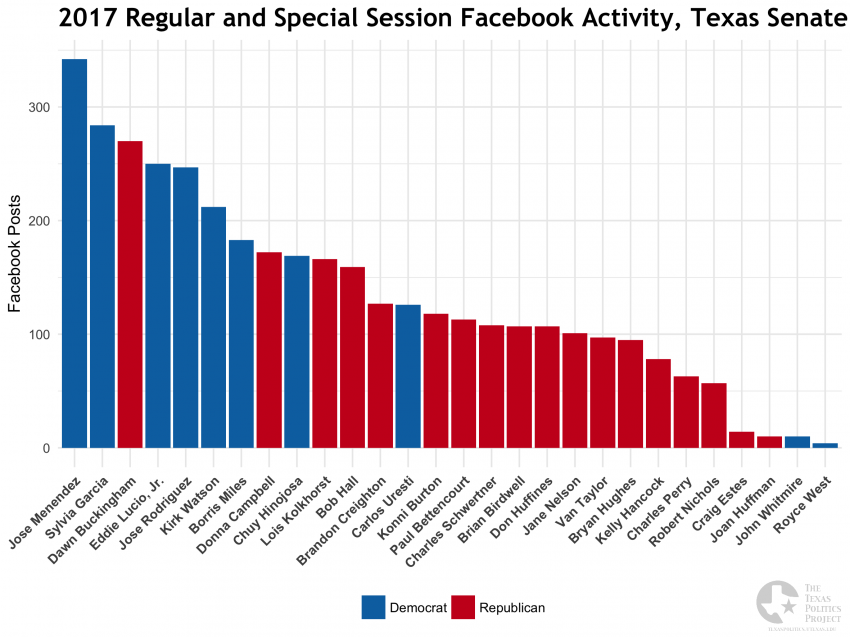 Who gets the best return on their investment?

Whether a member personally constructs their own posts or not, someone is spending important resources, time and money (paying for that time and/or sometimes buying audiences — ahem), to construct and disseminate these messages. An interaction with that post is the clearest and probably the best form of return. So does there appear to be a return on investment for this activity, as seen in public interactions with these Facebook posts in the form of “likes”?

To measure engagement, the two graphics below show the average number of post “likes” for each senator and representative, respectively. Again, the House graphic only includes the averages for the 30 most active users by volume. 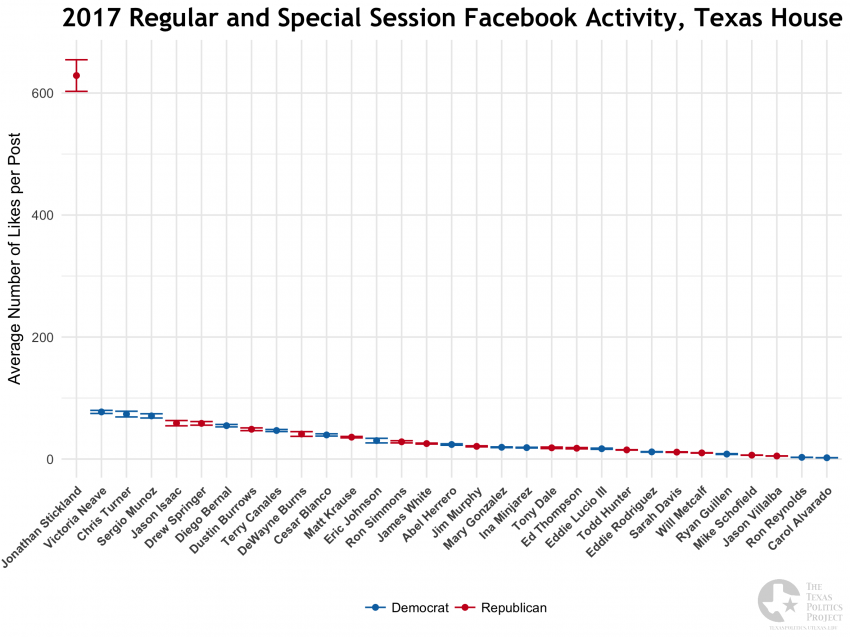 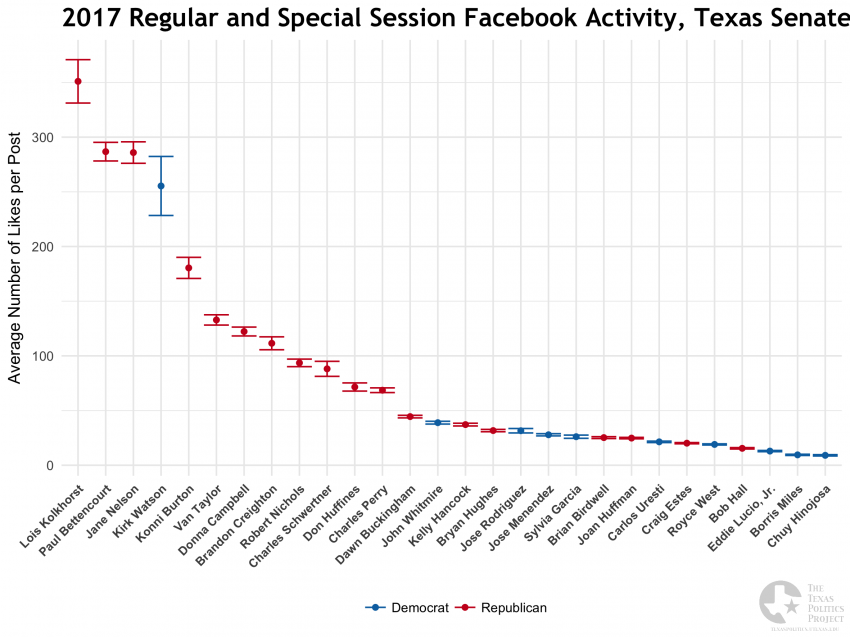 While Democrats may post more often, certain Republicans appear to be getting a better return on their time. Lois Kolkhorst (SD18) and Jonathan Stickland (HD92), both frequent posters in their respective bodies, are the two legislators with the highest average number of likes in their chambers. Kolkhorst is closely followed by Paul Bettencourt, Jane Nelson, and Kirk Watson among senators, but Stickland appears to be in a league of his own among members of the House.

So while Texas Democrats post more often on average, they don't necessarily get a great deal of engagement in return. The effectiveness of some members on Facebook could be attributable to a couple of things. High interaction posters like Stickland and Kolkhorst may have particularly engaged constituencies, particularly appealing content, or a combination of both (we make no claims here about the content of these posts, explicitly). All of these possibilities require more analysis. In the meantime, state legislative communication staffers and their campaign counterparts might do well to take their own look at what makes Stickland, Kolkhorst, Bettencourt, Nelson, and Watson's pages and posts so appealing in the run up to the 2018 midterm elections, and heading into the 2019 Legislative session, if they want to better realize a return on their Facebook investment. In the longer run, we can also learn more about public interactions with elected officials at a time when voters seem locked in a state of perpetual dissatisfaction with political institutions like the one they comprise.

*Note, this graphic does not include members who had pages but made no postings. Also, on account of technical problems, we were unable to scrape Rep. Tracy King's Facebook page. No offense is intended by these omissions.

(UPDATE 04/13/2017: This post has been updated to correct for the omission of Senator Sylvia Garcia in the initial posting.)