Edmund J. Davis, Union Army officer and Reconstruction governor of Texas, was born at St. Augustine, Florida, on October 2, 1827, the son of William Godwin and Mary Ann (Channer) Davis. His father, who came from South Carolina, was a land developer and attorney at St. Augustine. The young Davis received his education in Florida and moved with his family to Galveston, Texas, in January 1848. There he worked as a clerk in the post office and studied law. In mid-1849 he moved to Corpus Christi, where he worked in a store and read law. He was admitted to the bar in the fall of 1849. Between 1849 and 1853 he was an inspector and deputy collector of customs at Laredo. In 1853 he became district attorney of the Twelfth Judicial District at Brownsville. About 1856 Governor Elisha M. Pease named him judge of the same district, and Davis continued to serve as a state judge until 1861. As judge he accompanied the ranger unit of Capt. William G. Tobin, who was involved in the Cortina affair at Brownsville in 1859.

On April 6, 1858, Davis married Anne Elizabeth Britton, daughter of Forbes Britton, a state senator and friend of Sam Houston. The couple had two sons, Britton and Waters. Britton was born in 1860, attended West Point, and became an officer in the United States Army. Waters, born in 1862, attended the University of Michigan and became an attorney and merchant in El Paso.

Davis was a Whig until the mid-1850s. In 1855 he joined the Democratic party in a fusion against the American (Know-Nothing) party, and he remained a Democrat until after the Civil War. In later politics he supported Sam Houston and opposed secession in 1861, when he ran unsuccessfully to become a delegate to the Secession Convention. After secession Davis refused to take the oath of loyalty to the Confederacy, and the state vacated his judgeship on April 24.

As a result of his opposition to the Confederacy, he fled the state in May 1862. With John L. Haynes and William Alexander, he went to New Orleans, then to Washington, where the men met with President Abraham Lincoln, who recommended providing arms to troops that they wanted to raise. On October 26, 1862, Davis received a colonel's commission and authorization to recruit the cavalry regiment that became the First Texas Cavalry (U.S.). 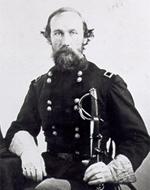 Davis and the First Texas saw extensive service during the remainder of the war. They were at Galveston on January 3, 1863, and barely escaped capture when Confederates took that city back from Union hands. On March 15, 1863, Confederate citizens and off-duty soldiers seized Davis in Matamoros, where he was attempting to take his family out of Texas and recruit men for his unit. This event precipitated diplomatic trouble between the Confederacy and Mexico that lasted until Gen. Hamilton P. Bee released Davis to appease Mexican governor Albino Lopez. From November to December 1863 Davis was in Texas as a part of Gen. Nathaniel P. Banks's unsuccessful Rio Grande campaign. His unit marched to Rio Grande City and seized cotton and slaves in an effort to disrupt the border trade. On November 4, 1864, Davis was promoted to brigadier general. For the rest of the war he commanded Gen. Joseph J. Reynolds's cavalry in the Division of Western Mississippi. On June 2, 1865, he was among those who represented Gen. Edward R. S. Canby at Gen. Edmund Kirby Smith's surrender of Confederate forces in Texas.

Davis participated in state politics as a Unionist and Republican after the war. He served in the Constitutional Convention of 1866 and ran unsuccessfully for the state Senate from his old district in the 1866 general election. He represented the border district and was president of the Constitutional Convention of 1868-69. In this period he consistently supported political programs that would have restricted the political rights of secessionists, expanded rights for blacks, and divided the state. He also favored the ab initio theory, which held that all laws passed since secession were null and void.

In the election of 1869 Davis ran for governor against Andrew J. Hamilton, another Republican, and won in a closely disputed race. His administration was a controversial one. Its program called for law and order backed by a State Police and restored militia, public schools, internal improvements, bureaus of immigration and geology, and protection of the frontier. All of these measures encountered strong attacks from both Democratic and Republican opponents and added to the controversy surrounding Reconstruction in Texas. Davis ran for reelection in December 1873 and was defeated by Richard Coke by a vote of two to one. Davis believed that the Republican national administration was partly responsible for his defeat, and relations between the governor and Washington were strained until he was removed from office by Democrats the following January in what is known as the Coke-Davis controversy.

From 1875 until his death Davis, contemporarily described as a "tall, gaunt, cold-eyed, rather commanding figure," headed the Republican party in Texas as chairman of the state executive committee. In 1880 he ran again for governor but was badly defeated by Oran M. Roberts. In 1882 he ran for Congress in the Tenth District against John Hancock, again unsuccessfully. He was nominated as collector of customs at Galveston in 1880 but refused the job because of his opposition to the administration of President Rutherford B. Hayes. Supporters recommended him for a cabinet position under President Chester A. Arthur, but he received no appointment. Davis died in Austin on February 7, 1883, and is buried there in the State Cemetery.