Issues and Delegates at the Constitutional Convention of 1875 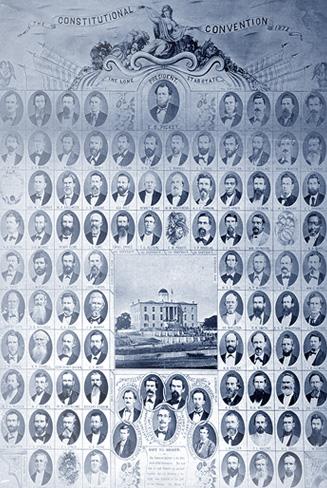 The Constitutional Convention of 1875 was the result of the determination of the Democrats of Texas to eliminate the radical Constitution of 1869. A strong movement to have the changes in that document made by a legislative joint committee and then submitted to the voters failed in the House of Representatives because of a belief that the electorate would resent such a centralized method of providing a new organic law. The legislature then called an election in August 1875, in which voters approved a convention to prepare a new constitution and elected three delegates from each of the state's thirty senatorial districts. The time before the constitutional convention was marked by a number of Democratic measures designed to undo many Republican acts previously passed. The centralized school system was weakened. State salaries and expenditures were cut, and the governor was stripped of his powers to appoint some state officers and declare martial law.

The convention, presided over by Edward B. Pickett, met in Austin on September 6, 1875, and adjourned on November 24. The new Constitution of 1876, which was adopted by a vote of fifty-three to eleven, was submitted to the people in an election on February 15, 1876. Seventy-five of the members of the convention were Democrats, fifteen, including six black men, were Republicans. Before the convention had gone far with its work one of the black members resigned, and his place was taken by a white Democrat. One of the members had helped write the Constitution of 1845; eight had been members of the Secession Convention of 1861; one had served in the Constitutional Convention of 1866; not a member had taken part in the Constitutional Convention of 1868-69. About forty of the delegates were members of the Grange; a number had been commissioned officers in the Confederate Army; three had served in the United States Army. Leigh Chalmers was chosen as secretary of the convention. Standing committees, each consisting of five to fifteen delegates, were appointed and covered issues including federal relations, suffrage, education, crime, railroads, and public lands. Agricultural and law-oriented interests controlled much of the agenda. In an effort to reverse the perceived Republican excesses of the previous years, restrictions were placed on salaries, expenditures, taxes, and the state debt. State banks were abolished, some activities of corporations and railroads were limited, and term limits were placed on many public offices.

The majority of the convention believed so firmly in economy that they refused to employ a stenographer and would not allow the proceedings of the convention to be published. The document that they prepared provided for short terms of office, low salaries, and limited powers for officials and indicated generally a lack of faith in government. These features were the results of the reaction of the members of the convention to the events of the Civil War and Reconstruction, through which they had just passed.