Depends what you mean by “integrity"

Texas attitudes in recent years suggest that despite some subtle shifts in their rhetorical rationale, this year’s biennial push to "protect free and fair elections in the state of Texas," as Gov. Abbott put it recently, is another instance of Republican leaders reminding their partisans that there is a sickness in the body politic that only they can cure. Never mind that the disease — a lack of trust in elections —  is an infection that GOP leaders have done more than their fair share to spread.

Gov. Abbott hailed efforts by the legislature after declaring “election integrity” an emergency item in his state of the state speech last month. Skeptics point to the rarity of cases of voter fraud despite the sustained efforts of Republican attorneys general to chase down and prosecute voting irregularities over the past two decades, as well as the demonstrable focus of Republican legislation on efforts to pass new laws and enforce old ones that have a disproportionate impact on Texans likely to support Democratic candidates, and, if they can manage it, to vote for them.

This session’s crop of bills suggest that Repulican legislators haven’t changed their fundamental approach to using election laws to affect the composition of the electorate – they are still attempting to constrain voters who are either much less likely to vote for Republicans, or live in areas, mostly urban, more likely to support Democrats. But the legislation proposed by the majority party this session as well as the rhetoric used to justify their proposals illustrate that Republicans have not completely ignored their critics or the lack of evidence of voter fraud that has long accompanied their cries of wolf. Their rhetorical justifications and proposals tap into two central sets of attitudes among Republican voters that deflect attention away from the general lack of evidence of widespread election irregularities.

The first set of attitudes has been assiduously cultivated by Texas’ Republican elected officials for two decades and internalized by their partisans: the belief that it’s too easy to vote and that Democrats are taking advantage of this slack in the system. While the spectre of “voter fraud” or, in more contemporary use, a “rigged system,” hangs over these beliefs, tapping into them clearly doesn’t rely on presenting evidence of widespread voter fraud and criminal behavior, which has been repeatedly shown to be lacking. The more vague indictment of the system as haphazard and either loosely or poorly run by partisan, local officials is enough to rationalize support for stricter, more centralized voting rules.

The second is of more recent vintage, though complimentary to the first: the lingering belief repeated by Donald Trump and his allies for the last five years and counting that the national elections that deprived him of a popular vote victory in 2016 and then again in 2020, this time ejecting him from the White House, are corrupt and not to be trusted. These beliefs endure despite the all-out but failed blitz by Republican elected officials across the country to prove fraud in the 2020 election, determined by dozens of courts to be without evidence or merit.

Public attitudes from University of Texas/Texas Tribune polling illustrate how both sets of beliefs are present among Texas Republicans, who provide a ready audience for the latest attempt by GOP lawmakers to shape the voting process, and in doing so, the electorate they will face in 2020, to their advantage.

The February UT/TT Poll, the first in the series conducted after the tumultuous 2020 election and its aftermath, found many traces of the decades-long effort by Republican elected officials and opinion leaders to cultivate skepticism toward the argument that Texas’ demonstrably (or at least comparatively) cumbersome voting and election system, from registration to casting votes to counting them, should be changed to make it easier on voters. We asked voters directly whether they thought it was easy to vote in Texas, and the partisan differences in the responses were telling: 76% of Republicans personally find it “very easy” to vote in Texas, compared to 45% of Democrats, and 49% of independents.

While perceptions of the ease of voting don’t on their own provide evidence that Republicans simply think it’s too easy to vote, another question probing somewhat global views of voting do point in that direction. A plurality of Republicans, 46%, want voting rules in Texas made more strict, with the lion’s share of the rest wanting the laws left as they are now (44%). Taken together, it’s clear from the data that the vast majority of Texas Republicans feel that voting is easy, and only 5% would like to see the rules for voting made any easier.

The February results follow years of Texas polling data consistent with the conclusion that most Texas Republicans suspect that voting rules are too lax. A series of results illustrate that while there are signs of widespread distrust in how elections are conducted, the sources of distrust differ contextually for Democrats and Republicans. Democrats worry about limits on access to the ballot box, Republicans tend to be more preoccupied with fraud and other perceived corruption in the process. We’ve written about this frequently in the past, so a quick reprise: Indicative of the general state of affairs after over a decade ostensibly combating allegedly widespread election fraud (in elections Republicans routinely win), October 2020 polling found 81% of Republicans saying that people voting who are not eligible would be a serious problem in the 2020 election,  a near mirror image of the 83% of Democrats who said the same about eligible voters being prevented from voting.

The large partisan differences in perceptions of the ease of voting has already been noted above, but other differences are equally important under the circumstances: 65% of white Texas voters say it’s very easy to vote compared to 55% of Hispanics and 48% of Black Texas voters. And, maybe most centrally — given that many if not most of the Republican legislative proposals appear in response to Harris County’s efforts to make it safer, and in some cases easier, to vote during the pandemic — the only other group who finds it as easy to vote in Texas as Republicans are rural Texans. Three-quarters of rural voters, widely credited with Republican efforts to hold the line in the 2018 and 2020 elections, say it’s very easy to vote, compared to 54% of urban residents and 59% of suburban residents. Ultimately, any law that limits access to the polls is likely to have a greater impact in Texas’ fast growing urban centers and their suburbs than in it’s continuously depopulating but solidly Republican rural areas. 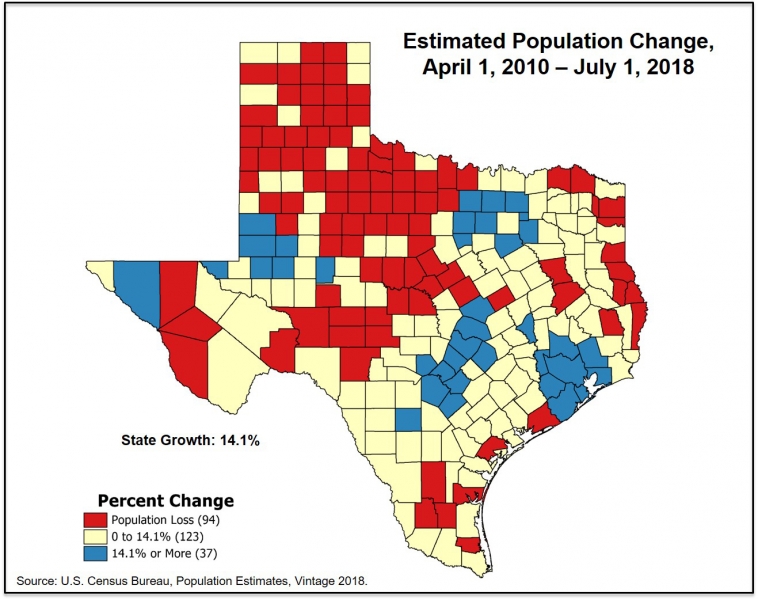 Donald Trump’s more proximate influence on the discussion of voting in Texas is readily apparent in responses to a question in the February UT/TT poll that probed perception of the accuracy of official election results in the United States and in Texas. A majority of Republicans, 52%, believe that the official results of U.S. elections are “very inaccurate,” with another 21% saying that they are merely “somewhat inaccurate,” leaving a paltry 23% of Texas’ majority party voters trusting the accuracy of elections in the oldest continuing democracy in the world.

While this apparent consensus among Republicans recurs as the primary rationale for bills in Texas ostensibly promoting election integrity, only 6% of Republicans say that the official election results in Texas are “very inaccurate” — 76% rate them either very (30%) or somewhat (46%) accurate — which would seem to negate the rationale for pursuing many of the laws currently on offer in HB6 and SB7, the omnibus centerpieces of the Republican election “integrity” project.

Democrats, as a group, are more trusting of the election process at both the state and national levels: 89% trust the results of national elections, and lest you think this all just represents another example of motivated reasoning, those same Democrats – shut out of power in Texas for more than a generation and chafing under increasingly strict voting rules for much of the last decade – hold similarly high levels of confidence in the results of Texas elections (88%).

As the 87th Legislature now actively undertakes a post-Trump effort to impose new rules, restrictions, and penalties across the breadth of the election system, the latest efforts by Texas Republicans seem another manifestation of a well-established case of political Munchausen syndrome by proxy: Having spent the better part of the last few years trumpeting unverifiable signs of a non-existent illness in the body politic, they are once again making herculean efforts to administer various cures to a symptom that they have created along the way: a lack of trust in the system. Years of polling results provide ample evidence of Texans’ decayed trust in the voting process and the conduct of elections in the state, culminating in the lead up to the 2020 election when, in the October 2020 UT/Texas Tribune Poll, the majority of Texans (60%) were either unable (46%), or unwilling (14%) to say that they would trust the results of the upcoming presidential contest.

The latest efforts by Republican incumbents to protect themselves by more strictly regimenting elections in Texas may work to marginally assuage the widespread distrust of the system among GOP voters through a combination of visible action and the partisan effect of strengthening the position of Repubican incumbents. It’s a testament to their effectiveness and the partisanship that defines politics in the state that Texas Republicans will likely applaud them for delivering a cure without thinking to blame them for causing the disease in the first place.