If Your Memo Serves You Well: Texas Data Points from the Week in Texas Politics, February 2, 2018

Political courage took a back seat to political calculation as the renegade memo on the investigation of Carter Page was made public, completing the eclipse of the President’s State of the Union and, at least for the moment, the increasingly corrosive immigration debate. While the fiddling continues in a smoldering Washington, D.C., the Comptroller delivered bad news of a more mundane variety to the Senate Finance Committee this week, while financial bad news of a different sort added to the woes of a (somewhat) surprisingly beleaguered George P. Bush in his increasingly contentious primary battle to remain Land Commissioner. Beto had better financial news than either Glenn or George P. (That sentence shows why the first name thing works better for O’Rourke). National media attention to a report on white supremacist groups focusing recruiting efforts on college campuses featured their fairly piddling efforts on Texas campuses, through our data suggests that White Supremacy pretty clearly doesn’t have a data analytics department – which is fine with us.

1. Profiles in Courage, Chapter CXV.  Despite public pressure from the head of the FBI, the DOJ, and any number of former intelligence officials, the memo written by House Republican staffers allegedly alleging abuses by the FBI amounting to bias against president Trump was just released. (The memo's promoters have claimed otherwise, but the President has been, shall we say, off-message today, as the Tweet below illustrates.) While many in the media appear to be viewing the memo’s release as an example of how far Congressional Republicans will go to protect Trump, releasing the memo is at least as much about how protecting Trump in the short-run dovetails with protecting themselves in the very uncertain long-run. The reluctance of GOP skeptics like Senator John Thune (and he’s not alone) to more strenuously resist the release of the memo shows the lengths to which Republicans in Congress are willing to go to feed a counter- narrative to the Russia investigation. In the short run, support among the base for Trump remains strong, and the promotion of the FBI/Justice Department conspiracy storyline by Trump’s allies in conservative media may be eroding confidence in the FBI among Republicans and Trump voters, but the jury is still out. Amidst this uncertainty, supporting the release of the memo enables GOP members to hedge their bets: they don’t appear to break with the president during primary season, but if necessary, have a rationale for failing to act against a sitting President during an election year, should Mueller’s Russia probe turn up evidence damning to Trump. This is not the first salvo in this strategy, but it’s already paying dividends. In June of 2017, Texas Republicans expressed significantly higher disapproval of the FBI than their Democratic counterparts. Nationally, a NPR/PBS/Marist poll of adults conducted January 8-10 found a similar pattern when asked about how much confidence Americans had in the FBI (overall, 57/39; Democrats, 63/30; Republicans, 54/41). While we don’t have Texas data prior to the whole 2016 Election kerfuffle, it’s hard to imagine that Texas Republicans, who hold extremely favorable attitudes toward the police (82 percent favorable, 8 percent unfavorable) and the military (89 percent favorable, 1 percent unfavorable), are coming to this conclusion about the FBI without some help.

The top Leadership and Investigators of the FBI and the Justice Department have politicized the sacred investigative process in favor of Democrats and against Republicans - something which would have been unthinkable just a short time ago. Rank & File are great people!

2. This is the biggest, most beautiful deal you’ve ever seen. Though Donald Trump’s first State of the Union speech, like most of his predecessors’, has already all-but-disappeared in the rear-view mirror, his reiteration of the White House’s four-point immigration plan continues to divide Republicans from Democrats, while also aggravating divisions inside each party. We did a data dump of the relevant data in last week's Friday post, so we won’t keep beathing that dead horse.  Suffice it to say that in Texas, where immigration and border security are the most salient problems for Republicans, and those same Republicans are largely enthusiastic about taking a hard line on the flow of undocumented immigrants as well as the treatment of those currently in the country illegally, Trump’s offer of what is already being called amnesty (even though DACA recipients are, by virtue of the program, in the U.S. legally) is a hard sell even to those who want to get something done and get the issue off the table – especially if they have a primary election coming up.

3. You were more fun when you were a Senator. Comptroller Glenn Hegar testified before his old colleagues that that budget outlook is bleak, and not because of Texas’ economy. In fact, Texas’ economy is doing relatively well, but the combination of deferred payments to Medicaid and the state’s highway fund in order to pay for other priorities in the current budget means that Texas is expected, according to the comptroller, to begin the 2019 session with a balance of $94 million, less than the $880 million they began 2017 with, and less still than the $7.3 billion that they began 2015 with, according to Edgar Walters in The Texas Tribune. While lawmakers and capitol insiders are sure to take notice, similar budgetary concerns were raised ahead of the 2017 session without the public taking much notice. In February of that year, we asked Texas voters about their knowledge of the current budget situation compared to 2015 – in short, whether they thought the state had more money available in 2017, less, or about the same amount. The plurality response, chosen by 45 percent of voters: “Don’t know.” Further, only 25 percent of Texas voters knew (or correctly guessed) that the state had less money. It’s a good thing that the Comptroller doesn’t have a primary challenger -- he’s going to have to have a full-time job if he's going to get Texans to understand the state of the Texas budget.

4. As another George might say: “What, was that wrong? Nobody told me…” It might be legal, but it sure looks bad. A story this week by Jay Root in The Texas Tribune highlights the campaign contributions to George P. Bush’s reelection campaign from executives of a company that received a $13.5 million contract from the General Land Office only three days after receiving that contract. While the overall amount of the contribution is small relative to Bush’s campaign warchest ($27,500, while Bush has $3.3 million on hand), the optics are obviously problematic. This comes on the heels of repeated concerns about the way that Bush and the General Land Office is handling the update to the sacred Alamo site. While none of this is likely to significantly increase the chances that former Land Commissioner Jerry Patterson bests Bush in the GOP primary, it does add to a narrative that the younger Bush may not be the future of the party that some had expected when he entered the political fray in 2014 – and Patterson is no rookie. BTW, is it just us, or does it seem like Jay Root has been eating his Wheaties or something?

5. “Wow, Beto O’Rourke outraised Ted Cruz in the most recent fundraising period!” “Beto who?” In another round of positive news coverage for Beto O’Rourke, Jennifer Hansler at CNN Politics reported that Senator Ted Cruz’s likely Democratic challenger posted a stronger fundraising quarter than the state’s junior Senator. So should we rethink our handicapping for that 2018 race? The short answer: not so much. Republicans still maintain overwhelming fundamental advantages in the electorate, especially in a statewide race, but more to the point, Beto is still relatively unknown in the state of Texas, even if he is the most well-known Democrat running for statewide office (or any office for that matter). It’s going to take a lot more money to introduce himself to one of the largest electorates in the country in a state with numerous, pricey, media markets. But hey, it’s a start. And to be fair, if there is any place the nationalization of this election we keep hearing about is likely to seep into the 2016 elections in Texas, it’s probably this race as opposed to any of the one’s determining control of state government. But a little seepage does not a wave make. (And if you're interested in the fundraising totals for any of the other Texas Congressional primaries, Ryan Murphy and Abby Livingston put together a nice little rundown over at The Texas Tribune.)

6. I bet they bought way too many tiki torches. Christopher Mathias at the Huffington Post reports that the Anti-Defamation League reported 147 incidents of white supremacist materials posted on college campuses in the Fall 2017 Semester compared to 41 incidents in the Fall of 2016. Texas’ own Southern Methodist University and The University of Texas at Austin were mentioned by name due to Alt-Right demonstrations at both. The article points out that the Alt-Right has made a habit of targeting college students for their more inclusive version of white supremacy. Fortunately, younger Texans are the group most likely to say that racial and ethnic minorities face “a great deal” or “a lot” of discrimination, and are also the least likely to say the same about whites.

BTW: If you missed it, Jonathan Tilove – thankfully back in town and writing after a long out-of-state odyssey – produced a fun multi-media First Reading about joining O’Rourke for his campaign all-nighter. Even Evan Smith was moved to admit in public that he liked it.

President Trump’s speech at the Republican Congressional retreat in West Virginia was secretly taped by breitbart (h/t James Hohman/Daily 202). Among other things, after bragging about his much-discussed 30/30 score on the Montreal Cognitive Assessment Test (meant to detect signs of dementia), he sought to boost the #nothumblebrag, “Let me tell you, those last ten questions are hard,” he said. “There aren’t a lot of people that can do that.”

Just for fun, judge for yourself.

Remember the Tea Party? The National Review’s Jonah Goldberg joined the chorus on the right and left in a column titled “The (Tea) Party is Over.” This column was mainly an observation that “the most striking thing about the speech was how much it fell into an almost Trupian version of compassionate conservatism – as if the tea parties never existed...except for some laudable bits about streamlining the bureaucracy and improving FDA policy, there wasn’t a hint of fiscal conservatism to it.”  Well, the tea parties did happen, and we’ve started working on a book project related to it. A first step was to begin looking at the 8 + years worth of polling data on Texas attitudes related to the Tea Party.  You’ll find a link to a conference paper we deliver last month and some new social-science-y graphics in a blog post from earlier this week. 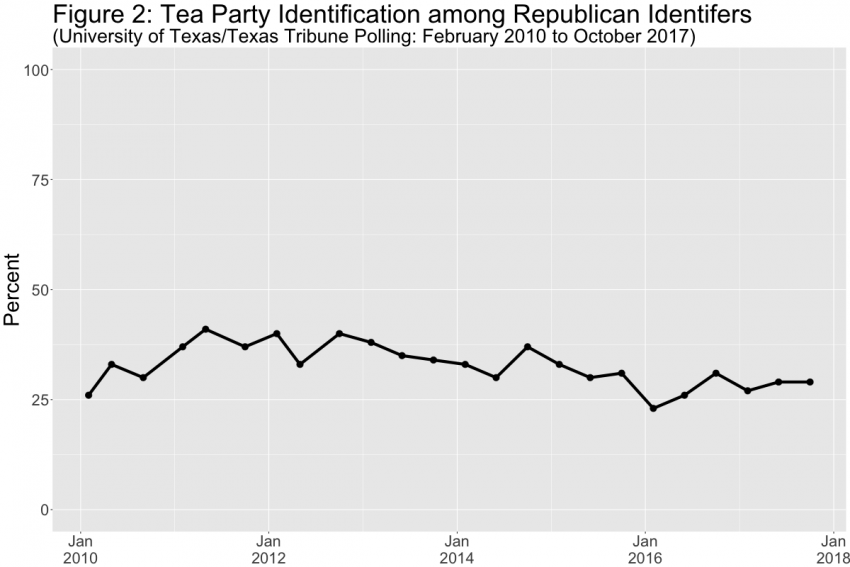